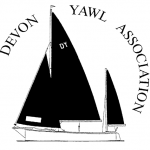 1.1 In the event of any dispute as to the meaning or interpretation of these Rules, the matter shall be referred to the Executive Committee of the Devon Yawl Association who will make a ruling which shall be final and binding.

2.1 BUILD: The hull shape and construction shall be that produced originally by Devon Craft (Salcombe) Limited from the moulds produced by them, or from moulds approved of by the Officers of the Association from time to time to the specification herein. Owner completed hulls shall conform. No alterations to the standard shape shall be permitted.

2.2 CONSTRUCTION: GRP simulated clinker, with side seats, a thwart amidships approximately mid way along the centreplate case, and a minimum 400 litres of buoyancy.

The use of Kevlar, Mylar or carbon fibre or other similar exotic materials is prohibited in the construction of hull or sails.

i. Minimum overall dry weight of the hull inclusive of all fixed fittings, bowsprit, floorboards and centreplate but excluding spars, sails and rudder assembly, to be 431.3kg (950lbs).

iii. Internal ballast to be carried of not less than the 65.37kg (144lbs) bonded in during building.

iv. Corrector weights to be fitted above the waterline and permanently attached. 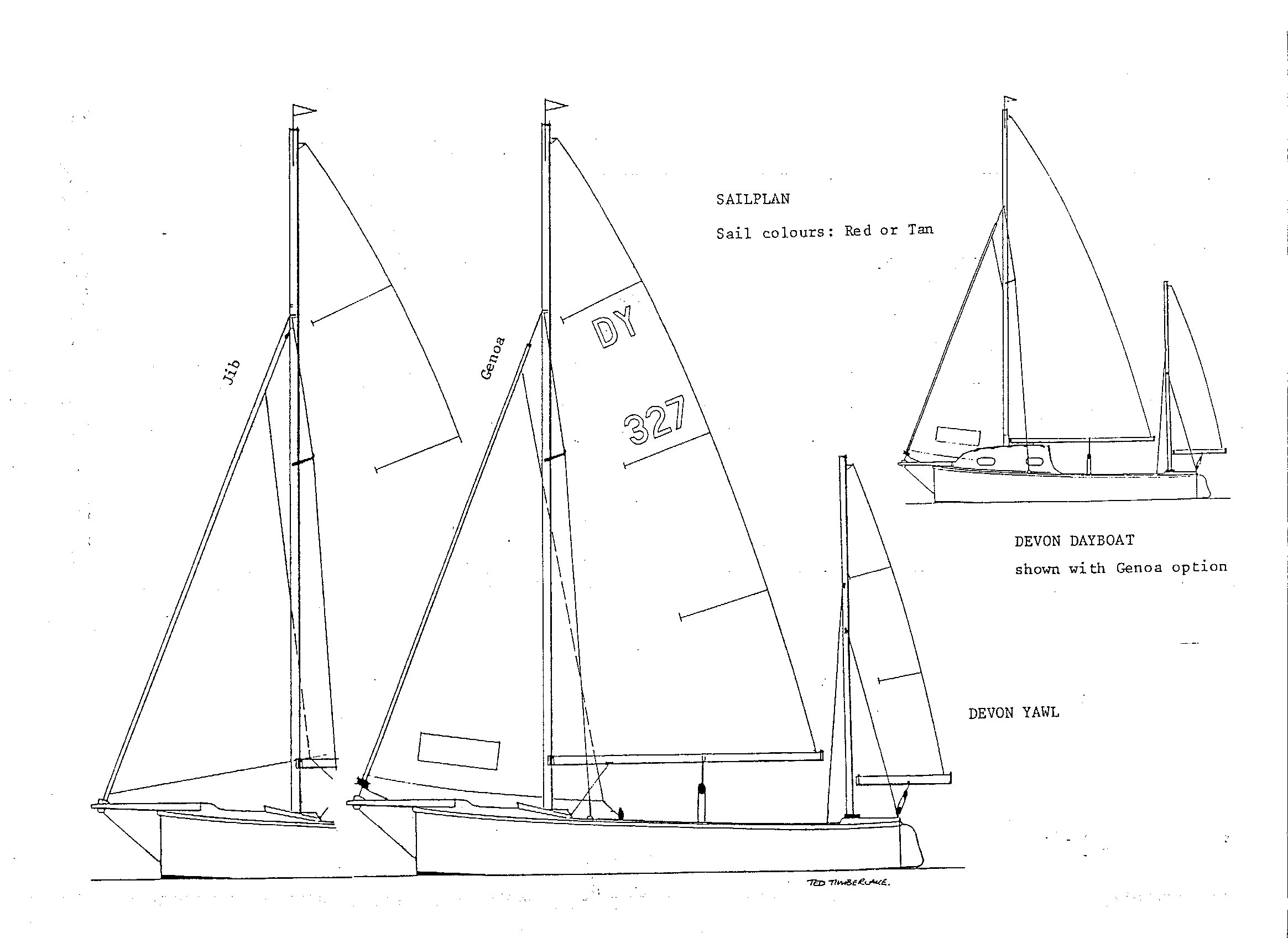 3.1 SPARS: Shall be aluminium alloy extrusion, except the bowsprit which shall be of wood and the jib stick which may be of wood. Manufacturer and section optional.

i. Mainmast; Length not to exceed 7.493m (24ft 7in). The mainsail when set shall not extend beyond the inner edges of bands, not less than 10mm in width, of contrasting colour on the mast and mainboom arranged as follows:-

Band – the forward edge of the mainboom band to be 2.743m (9ft 0in) from the after face of the mainmast when fitted on the gooseneck.

iii. Mizzenmast: Length not to exceed 3.479m (11ft 5in). Mizzenmast shall be stepped on the afterdeck.

vi. Bowsprit: The lower edge of the bowsprit shall not have more than a 50.8mm (2in) drop, measured at the tip, below horizontal when the bowsprit is laid flat on a board, with the tip overhanging the board.

i. Mainmast; shall be supported by a single forestay attached to the metal plate at the forward end of the bowsprit, a bobstay and two shrouds. These shall be of fixed length and securely attached to the mast, bowsprit and hull. Any adjustment to be by means of bottlescrews or stay/shroud adjuster plates only.

The forestay, main shrouds and bobstay shall be of wire, minimum size 3mm or chain for the bobstay.

ii. The mizzenmast shall be supported by two shrouds on either side.

i. There shall be a central mainsheet arrangement only.

The type and arrangement of fittings is optional unless specified elsewhere in these rules.

The use of the following fittings is prohibited:-

i. Mast rams or struts.

iv. Mainsheet horse of any type.

v. Trapezes or any other device to enable the crew to sit further outboard (excluding toe straps).

ii. Sails shall be red, tan, white or parchment in colour.

iii. The manufacturer of sails is optional.

iv. Construction: With the exception of windows, the construction of the body of the sail to be single ply woven polyester.

v. All measurements are maxima except where otherwise indicated.

i. The sail shall have not more than three batten pockets in the leech. They shall be arranged so as to divide the leech into approximately equal parts.

Note: The respective points may be determined by folding the sail as described in the IYRU Guild to Sail Measurement 1993

i. Battens, headboards and clewboards are not permitted.

ii. The headsail shall be sheeted by one clew cringle only.

iii. The headsail may be fitted with roller reefing gear.

iv. The headsail shall be attached at its tack cringle to the metal place or roller reefing gear, at the outer end of the bowsprit only.

i. The sail shall have not more than two batten pockets in the leech, arranged so as to divide the leech into approximately equal parts.

ii. Two width measurements shall be taken at half and three-quarter heights by a similar method as that used on the mainsail.

iii. The mizzen sail measurements shall have a maximum and minimum. 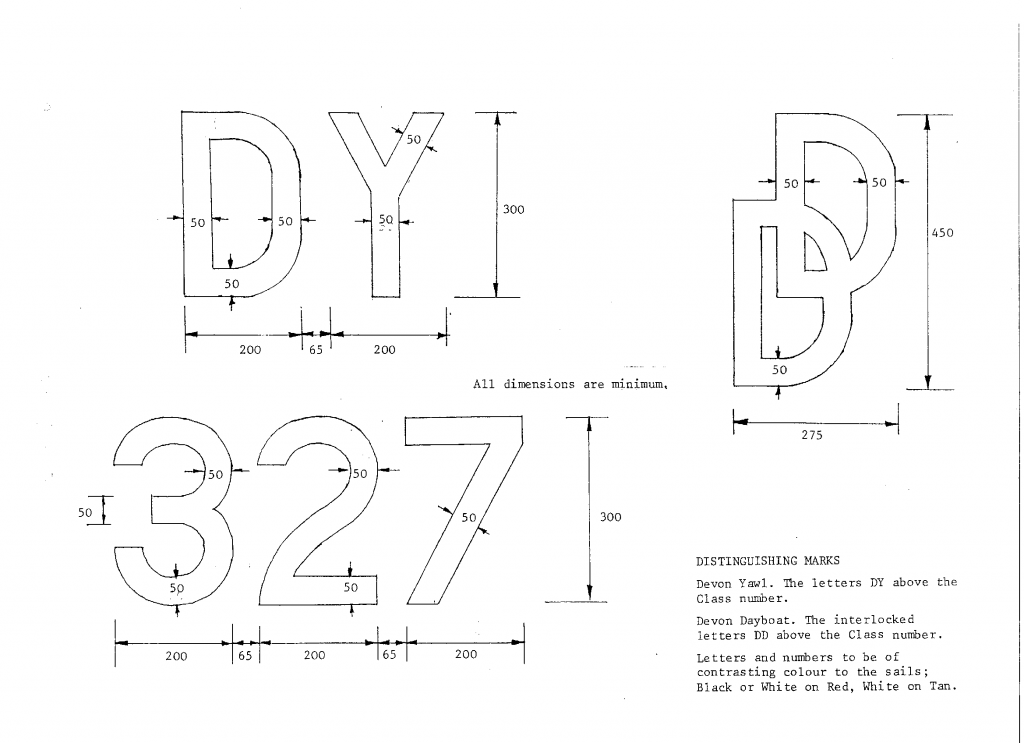 i. Devon Yawl; the letters DY above the class number.

iii. Additional blocks of numbers to be allocated when necessary.

iv. Duplicate numbers: Where it is discovered that two boats exist with the same number, the suffix A is to be added to the sail number of the second boat joining the Association in the absence of any documentary evidence confirming the precedence of one over the other.

v. Unnumbered boats: Where a boat is found to have no number issued, a new number will be granted by the Executive Committee provided the Devon Yawl or Dayboat to which a number is to be allocated meets with Class Rules. The blocks of numbers DY250 to 299 and DD100 to 125 are reserved for this purpose.

i. Foredeck/cuddy: It shall have one.

ii. Mainmast: Not to exceed 6.485m (21ft 3 5/16in). Clearly discernible measurement bands, not less than 10mm in width, shall be painted to encircle the mast as follows:

iv. Notwithstanding the contents of rule 4.1 (i) (but subject to 9.09 (ix)) in the case of a Dayboat with the mainmast stepped on the tabernacle, the forestay may be capable of release from within the cockpit in order that the mast may be raised or lowered from there.

i. All boats entering in events shall conform to these rules.

ii. All boats shall be covered by third party insurance to the minimum amount determined in the notice of race published by the organising body, and must show evidence of such cover on request. Without such insurance a boat shall not take part in the event.

iii. Crew to consist of two or more persons including the helmsman.

iv. Personal buoyancy for all crew members to be on board when racing.

vi. A bucket minimum 9 litre (2 gallons) for bailing to be on board.

vii. No adjustment of the position of the mainmast heel to be permitted whilst racing.

viii. All boats to be fitted with suitable oars or paddles to be on board.

ix. No adjustment to standing rigging whilst racing.

x. No deliberate adjustment to the position of the fixings for the mainsheet shall be permitted whilst racing.

xi. No sails other than sails conforming to these Class Rules may be set whilst racing.

xiii. Reefing lines need not be fitted but must be carried.

xiv. Boats are permitted to race without mainsails.

xv. Boats shall at all times when racing have their mizzen hoisted. The only exception permitted is in the case of a right of way boat which loses its mizzen as a result of a collision.

xvi. All local club rules and laws are to be observed even when they conflict with the Devon Yawl Association Class Rules.

APPENDICES (These appendices do not form part of the Class Rules.)

Sail definitions are in accordance with the ISAF Equipment Rules of Sailing 1997-2000. Reproduced below are those definitions used in the Class Rules and printed in bold type.

“SAIL; An item of equipment attached to the rig, used to propel the boat.”

“HEADPOINT; Mainsail, headsail and mizzen – the intersection of the luff extended as necessary and the line through the highest point of the sail at 90 degrees to the luff.”

“CLEW POINT; The intersection of the foot and the leech, each extended as necessary.”

“TACK POINT; The intersection of the foot and the luff, each extended as necessary.”

“AFT HEAD POINT; The intersection of the leech extended as necessary and the line through the head point at 90 degrees to the luff.”

“HALF LEECH POINT; The point on the leech equidistant from the aft leech point and the clew point.”

“QUARTER LEECH POINT; The point on the leech equidistant from the half leech point and the clew point.”

“THREE-QUARTER LEECH POINT; The point on the leech equidistant from the head point and the half leech point.”

“SOFT SAIL; A sail capable of being folded flat in any direction without damaging the ply, except in the areas of reinforcement.”

“WOVEN PLY; A ply which, then torn can be separated into fibres without leaving evidence of a film.”

“SINGLE-PLY SAIL; A sail where all parts of the body of the sail consist of only one ply.”

“BATTEN POCKET; Additional ply to form a pocket for a batten.”

“LUFF LENGTH; The distance between the head point and the tack point.”

“LEECH LENGTH; The distance between the head point and the clew point.”

“FOOT LENGTH; The distance between the clew point and tack point.”

“MID FOOT POINT; Headsail – the point on the foot equidistant from the tack point and the clew point.”

“FOOT MEDIAN – The distance between the head point and the mid foot point.”

3. Condition of the sail during measurement shall be that as described in the ISAF Guide to Sail Measurement 1997-2000.

The Devon Yawl does not currently have a Portsmouth Number (PN) for the purposes of handicapping. The Association recommends clubs use 1184 as a Trial Number (TN) where no Club Number (CN) has been derived from its own race results. Clubs where Devon Yawls are raced in handicap fleets are requested to submit their Returns to the RYA so that the Portsmouth Yardstick Advisory Panel can consider allocating a Number.